Fishermen Out Loud returned to Kodiak on Saturday, April 26, 2014 at the Kodiak Harbor Convention Center. More than 200 people listened to original poems, stories and songs about Kodiak, fishing and the sea presented by six talented fishermen / artists. Produced in partnership with the Kodiak Arts Council, support came from the Alaska State Council on the Arts, the Rasmuson Foundation, and individuals and businesses in the Kodiak community. 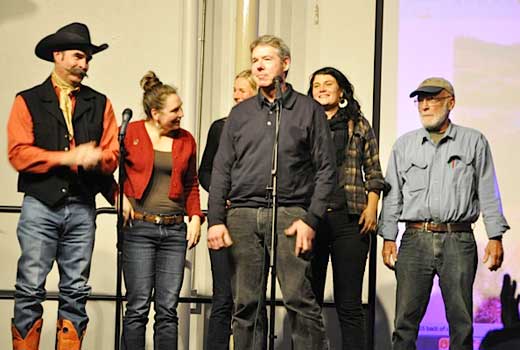 Moe Bowstern has been a commercial fisherwoman in Alaska since 1986 and presently lives in Portland, Oregon. She describes the lives of commercial fishermen in essays and songs, and has been a performer at the Fisher Poets Gathering in Oregon since it began in 1998. Moe is the founder and editor of “Xtra Tuff,” a literary ‘zine devoted to commercial fishermen and fisherwomen, and performs regularly across the country on stage and radio.

Billie Delaney was born and raised in Oakland California. At the age of fifteen she left home and high school to pursue a life of reckless vagrancy, which for better or worse found her working in the commercial fishing industry. She fishes in Bristol Bay, Southeast Alaska and on the Washington coast. She lives in Port Townsend Washington.

Erin Fristad survived fifteen years as a deckhand on a wide variety of vessels and adventures. She chased herring in Togiak, crab off the Columbia River, salmon more places than she can remember, and for five years pursued fish in the name of science. Eventually the tide brought her to Port Townsend, Washington, where she continues to write. Erin was a subject in the documentary film, “The Fisher Poets,” and her poems have been published in various places including Rosebud, America’s Review, The Blue Collar Review, Hanging Loose, The Seattle Review and Working the Woods, Working the Sea: an Anthology of Northwest Writing. Her poem Advice to Female Deckhands, was included in the Salmon Nations Artists Project CD. Erin is a regular performer at the Fisher Poets Gathering in Astoria, Oregon, and is grateful for its generous and tenacious support of fisher folk.

Ron McDaniel is not a commercial fisherman, but he claims to have eaten more wild salmon than any bowlegged man alive. Ron lives in northwestern Arkansas and is a husband a father of three kids. They keep a few horses and graze some calves in order to maintain their debtor relationship with the bank. Ron manages the horse business for an animal health company and day works for the Adams Cattle Company. As a testament to his skills, the cow boss at the ranch says that “hiring Ron was like losing two good men.” Invited to the Fisher Poets Gathering in Astoria several years ago, he’s like a cowboy who keeps showing up at your house every year to sleep on your couch.

Clemens Starck sailed off the West Coast as a deckhand with the Seafarers International Union (SIU) in the late ‘60s. Mostly he has worked as a carpenter and construction foreman. Five books of his poems have been published: Journeyman’s Wages, (1995), Studying Russian on Company Time (1999), China Basin (2002), Traveling Incognito (2004), and Rembrandt, Chainsaw, (2011). He is a recipient of the Oregon Book Award for Poetry as well as the William Stafford Memorial Poetry Award from the Pacific Northwest Booksellers Association. He lives in rural Oregon.

Toby Sullivan has been a commercial fisherman since 1975 and writes about the sea and the lives of fishermen. A long time performer at the Fisher Poets Gathering in Astoria, his work has been published in numerous magazines, literary journals, and anthologies, and he was featured in the film, “The Fisher Poets,” (2004). He lives in Kodiak, Alaska.