Kodiak: A Bond with the Sea

The Kodiak Archipelago lies 90 miles southwest of the Kenai Peninsula and 40 miles east of the Alaska Peninsula. The largest island is Kodiak, which is about 100 miles long and 50 miles wide. A spine of mountains, several over 6,000 feet high, runs the length of the island, and the coastline is indented with many fiord like bays, the result of glaciers which scoured the island thousands of years ago. While the north end of the archipelago is forested with Sitka Spruce, the southern portion is treeless tundra and brush. The trees are gradually moving south, re-colonizing the land since the retreat of the glaciers.

The archipelago lies just west of one of the most active seismic faults in the world, where Pacific tectonic plate is colliding with the North American plate. Minor earthquakes occur regularly on Kodiak and great earthquakes happen every few centuries. On March 27, 1964, the largest earthquake ever recorded in North America ruptured the fault east of the island, shaking south central Alaska for five minutes and creating a series of tsunamis which destroyed much of downtown Kodiak and other coastal Alaskan towns around the Gulf of Alaska.

Kodiak was first inhabited by people who arrived in kayaks from western Alaska about 7,500 year ago, not long after the glaciers retreated from the land. These people made their living from the sea, hunting marine mammals including sea lions, sea otters and whales, and by catching cod and other fish, including the salmon which return each summer to Kodiak. The descendants of these first people, the Alutiiq people, are part of Kodiak’s vibrant present day culture, which includes people of European, Asian, Central American and African descent.

The people of Kodiak still make their living from the sea, subsistence fishing to feed their families, and fishing commercially for fish and crabs in the Gulf of Alaska and the Bering Sea with state of the art vessels and electronics. Kodiak’s harbor shelters the largest fleet of fishing boats on the west coast, and is one the top three fishing ports in the country, as measured by poundage and value of the catch.

The sea around Kodiak is enriched by freshwater run-off and ocean upwelling, creating a nutrient-rich environment which supports massive phyto- and zoo-plankton populations. These plants and animals are the bottom of a food chain which sustains a diverse biomass of crabs, cod, halibut, salmon, and other fish, many of which the fishermen of Kodiak deliver to the world. 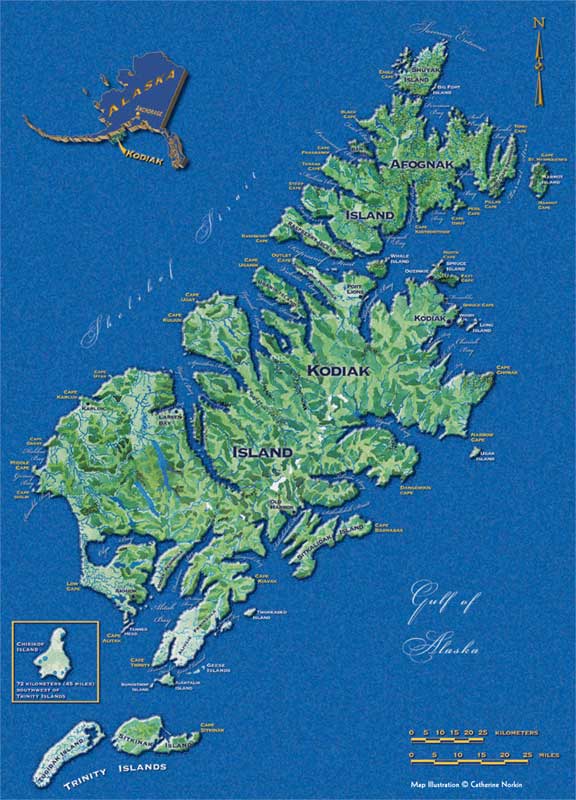